We pinned down the award-winning writer for a quick chat.

Chances are, if you’re aged 20 to 40, you’ll have encountered HBO’s dramedy Entourage. The show, which followed Vincent Chase (Adrian Grenier) and his hometown bros on his journey into the Hollywood elite, was a huge hit both critically and commercially, with millions of viewers tuning weekly to follow the gang’s exploits. The appetite for the show was such that they filmed a whopping 98 episodes, making it the longest-running series on the groundbreaking network that gave us Sopranos, The Wire, Deadwood and more.

Safe to say it will go down in history as one of the most successful TV series of all time, though it hasn’t escaped criticism. Over the years various pundits have called out the show for its treatment of women and the homophobic lines from the show’s most polarising character, Ari Gold (Jeremy Piven), who often reflected the ugliness of the movie business in foul-mouthed tirades.

It’s hard to imagine Doug Ellin, Entourage creator, could have envisioned the tremendous success of the show. After writing two movies, Phat Beach and Kissing A Fool, which were both sold to studios, he’d been working as a staff writer on sitcom Life With Bonnie. Then, in 2003, Mark Wahlberg suggested a show be made based on his career and childhood posse from Boston, and the rest was history.

As you’ll hear in the interview below Ellin didn’t take much time to reflect on the cultural significance of the Entourage, instead keeping his head down, constantly working to make it the best it could be (perhaps this was the secret to the success). Now, however, he’s gone back and re-watched each episode for Victory – The Podcast that he’s hosting with Kevin Dillon AKA Johnny ‘Drama’, which is a must-listen for fans of the series or anyone who’s interested in a BTS look at a hit TV show – check it here: 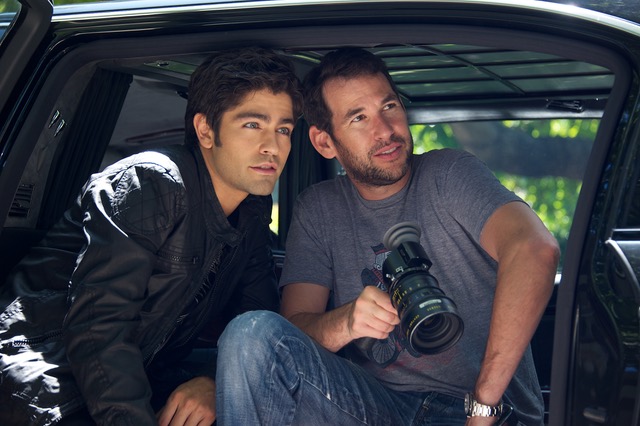 How long were you working on the idea of ‘Entourage’ before you started writing it?

Mark Wahlberg came to me with a loose idea about him and his friends and we went and pitched it pretty quickly after that. It was the process after selling it, which was sold based on Mark, not on myself. Then it seemed out to be writing a script. So from the day we first pitched this to HBO until the time we actually got in front of the cameras with well over 18 months.

How did it feel when the show was picked up and how did you celebrate?

I mean the first time I saw it come on, HBO was probably my biggest celebration. When I heard that logo come up with that buzz. I was with my family and at least 50 of my high school friends, many of whom would have characters and stories based on them in the show years to come. I think that’s what we did in New York, but I never took a lot of time to celebrate.

So you wouldn’t say you anticipated the success of it?

No, no. I’ve never anticipated success with anything to be honest with you.

People watch a show like ‘Entourage’ and often don’t realise that like there’s so much hard work that goes into it. What was it like working on the show? A non-stop party?

Not for me. I mean, there’s no doubt that the set and the actors will tell you this was one of the more fun sets to be on. We usually had great weather, usually had very good looking people, both men and women on the set, and we were doing fun things, but the writing process and the production process is always challenging.

On Entourage it was like we shot like a movie every week. We were moving around a lot and shooting a lot of pages a day and it’s work. I used to have – they called it the peanut gallery – which all these friends of mine who would come to a set and watch like it was a live show. And so many of them would be like, “This is boring as hell.” It looks better once you’ve finished and edited and it’s all compiled. That being said, I think the people who worked on the show definitely were having a good time.

There were so many epic cameos on the show, from Kanye to Mary J. Blige, to Scorsese. Was there anyone that surprised you that they wanted to be involved?

All of them! Mary J. Blige I ran into her at the Beverly Hills Hotel and someone said, “He created Entourage.” And she’s like, “I love that show. I want to be on.” I’m like, “You’re on!” I love Mary J Blige and Scorsese…. my idol, and everybody’s saying we should get James Cameron. And so I called Mark Wahlberg and said you got to get these guys and Mark delivered.

There were different ways that it happened, but I was always in awe of the people we had and just felt blessed to be around them. We really did have some absolutely incredible people come on that are heroes of mine, Larry David and Tom Brady and U2. So there’s so many. So, that was always a great thrill.

Did you have a particularly favorite episode? One that was fun to work on? Or one that you were particularly proud of in terms of writing?

There’s a couple of things, but shooting in Yankee Stadium was a memory that I’ll never forget, same with the U2 concert. But, my children were there and all my friends from high school were there, that a lot of these characters were based on, that was great.

As far as the writing, the easiest script I ever wrote was the one that got nominated for an Emmy. I think that script took me like an hour to write, where there are scripts that people don’t like that took two months. That was one of those writing moments that you just always hope for when it just comes easily and people respond to it.

Do you ever reflect on the fact that you created something that many people consider to be a cultural touchstone?

We’re doing this podcast, Victory the Podcast, with Kevin Connolly and Kevin Dillon, and I, so now I reflect on it more than I ever had in the past. I mean I’ve been rewatching episodes, so we can discuss them, among other things.

But, I was never a kind of looking back guy. And I don’t mean that I dismiss it, but I was always about just trying to keep it good, trying to keep it going and climbing away. So now it’s interesting to look back and see it through my kids’ eyes, and to have their friends telling me they’re watching it now, they’re 16 and 19 years old. So to hear that obviously makes me very happy.

Was there a different approach when writing the movie? Were there different challenges there?

It really was nothing different. We did it with the same crew, the same actors, and I wrote the same tortured way I wrote everything else. In the US, we didn’t get the response we quite hoped for, I think the ‘Me Too’ Movement was really bubbling and coming up and there was kind of weird backlash that I definitely was not expecting because we were a critical hit in the country before that. I think we did well in Australia so thank everybody in Australia for that.

I didn’t really want to do the movie because I was kind of just like, “I don’t know if I have any ideas, but that was the same thing every season.” I’m like, “How much more can we do?” But once we got rolling, I felt good about it. And the process was again similar to the show, except for the script being done, so I didn’t even have to think about a future script. So it was actually really great. The movie was a lot of fun to make and I wish it made more money for everybody involved, but we had a great time doing it.

Touching on what you mentioned there with the Me Too movement, do you think ‘Entourage’ would be a different show if it were made today?

I don’t think that it would be a different show. The language and content will always change based on the times. And some things will last through history and some things will feel dated. I like to feel that Entourage still feels relevant today, but there’s certainly dialogue that people just wouldn’t say today in public, you just wouldn’t do it. Ari would never be allowed to talk like that in any office, anywhere in America currently. And probably shouldn’t be. But at that time, people in the city will tell you there were lots and lots of Ari’s out there talking far worse than he was.

I did everything I could to make Ari a talker rather than a bad guy. He spoke things, but his actions were usually good. No one would speak like that anymore, but that’s not to say that the show would not be able to be made because again, it’s about friendship and loyalty in Hollywood.

Listening to the podcast, it’s clear that you guys are still such good friends. Is that the case with the cast largely?

I mean, I wouldn’t say the whole crew, obviously such a big group, but I can’t tell you how many people are in touch on a regular basis to crew members, to casting, to the woman who did our hair. We really were a family.

We had Domenick Lombardozzi on the podcast the other day. He played Dom for a few episodes, a notorious character on the show. He’s done 20 different television series, and he said it was so rare to do a show and especially for him he was on for three episodes and has friends for life. And that’s what we have.

2w Five New Drops You Probably Can’t Afford
If you can, please lend me some money.