Make sure you have a high tolerance for tequila…

Aussie EDM artists definitely having a moment on the global scene, with homegrown producers & DJ’s turning up crowds across the world like none other. Their sets are totally transportive, making for a proper sonic journey as they take you through gorgeous drops, build ups and everything in between. Two artists that are more than living up to the hype are house gods Dom Dolla & Sonny Fodera.

The start of 2020 alone saw them selling out over 10,000 in the U.S., with punters ready to fill up venues such as LA’s The Shrine, Denver’s Mission Ballroom & San Francisco’s The Midway at a moments notice for them. Between Dom & Sonny, it’s clear that if you know how to kick ass live, the fans are gonna come swarming in, and swarm they have.

Their latest release ‘Moving Blind’ is the two mates’ first proper collaboration, and embodies everything we love about both house veterans. Enchanting hooks, addictive kicks & otherworldly synths. Not to mention, it features one of the most satisfying drops I’ve ever heard, groovy enough to send you to house heaven and back in time for the next build up. They’re in no short supply of all of the above, and there’s no doubt that once they hit the road together again in November, they’re gonna blow a hole in the U.S. EDM scene like no one has before.

We caught up with the pair ahead of the release of ‘Moving Blind’ to pick their brains on the tune as well as get a deep dive on their lives on tour, check it below.

I wanna start this off with a super important question: Who gets up to the crazier antics on tour out of the pair of you?

Dom: Definitely me haha, Sonny has reigned in as of late. He’s got a few years of touring wisdom on young Dominic.

Let’s pretend I was about to come on the road with you guys and had no idea what either of you were like. Would you give me any warnings?

Dom: I’d say if there’s a weekend of back to back shows get sleep at every single opportunity, steal naps when you can or you’ll be in strife come monday. It’s very easy to get swept up in the disco haha.

Sonny: Make sure you have a high tolerance for tequila!

Are there any essential items you’d have me bring? Or are there any items you guys just have to have with you when you’re on the road?

Dom: Earplugs, gym clothes and a good podcast for when your plane is stuck on the tarmac.

Now talking about the relationship between you two, is there a certain habit or pet peeve you guys have noticed about the other?

Dom: I’m pretty sure me bailing on dinner every night to have a nap before the show would do Sonny’s head in. Also I can be pretty annoying on stage after a few beers, “Dave Dolla” is the alter ego that makes an occasional appearance. On my end; Sonny’s need to dry clean his fancy T-shirts instead of a tumble dryer… laundromats are hard to find at the best of times ya dingus!

Sonny: Dom’s manager ordering numerous McDonalds to the club greenroom & eating cheeseburgers on stage is pretty out there! Oh and also, Dom’s need to get on the microphone at pretty much every show & shout out my mum has been pretty hilarious.

100k spins in 24 hours 🤯Sonny and I couldn’t be more stoked with all of your feedback on Moving Blind. Such a strange time to be releasing records built for the club, but it doesn’t seem to be stopping you guys… THANK YOU! @sonnyfodera @sweatitoutmusic @solotoko @threesixzero

Speaking of rider requests, what are some essential or dream items for a rider when you’re playing a show?

Dom: For me a local fridge magnet is essential, I love plastering plastic paper holders all over my fridge at home in Melbourne.

You guys shared a couple of clips on IG last week of the pair of you testing ‘Moving Blind’ at some shows together, and you both look like you’re having the time of your lives. How do you guys maintain such high energy every show?

Dom: I think we’re just really lucky to have been playing to some amazing crowds over the last couple of years, everyone comes to the gigs with such an energy it’s hard not to get crazy excited with them.

Sonny: The sell out shows across LA, San Francisco, Denver etc is just an incredible vibe! You just thrive off the energy of the crowd.

Who wants me & @domdolla to drop our new track next week? 🤪

Does it ever get draining being on tour? If so, how do you get through those harder parts of the job? Do you lean on each other for support?

Dom: Oh definitely, being away from friends and family is the tough bit, but I’m always on facetime with everybody back home. It just makes it extra special when they come to enjoy it with me, or even better… a hometown gig pops up.

Sonny: To be honest, our tour was really well put together, our agent has done an amazing job! The flights weren’t horrendously spaced out, it’s not like we were flying from LA to NYC in 24 hours. It was all localised, which made it easier for sure.

Do you remember the first time you played ‘Moving Blind’ live together? What was the reaction from the crowd like?

Dom: I actually remember the first ever time we played it, we had exported the stems wrong and it was missing all the low-end from the bassline so it didn’t hit at all haha. By the next show we had it fixed and some goosebumps followed.

Sonny: I think it was in Detroit the first time we played it & the crowd went mad. But don’t quote me on it being in Detroit, because I’m not 100%, it was a pretty blurry tour!

I’ve also gotta give you both mad props for selling out huge venues and thousands of tickets in the U.S. together. What does it feel like to be selling out such huge shows overseas, away from home?

Dom: Pretty incredibly honestly, I think house music is really connecting in America over the last few years, it’s just super exciting to be a part of it.

Sonny: It feels amazing! Especially at venues like The Shrine in LA, The Midway in San Fran, Mission Ballroom in Denver, just legendary venues & it feels incredible to be able to do that.

LA, Denver, SF… I’m actually still trying to wrap my head around the past weekend. 11 thousand tickets across three shows. @sonnyfodera and I are absolutely floored by you lot, thank you 🙏🏼Chicago, Brooklyn, Boston – we’ll see you in April 🇺🇸 ❤️ 📸 @trevordeanphotos @edenskiz @aanjehlo

Being that you both have such a crazy job, how do you each manage to not lose yourself to all the craziness of tour life? What do you do to survive in those insane environments?

Dom: Staying connected with friends and family is #1 for me, I like to think of myself as a pretty relaxed dude. Plus artists with big ego’s aren’t much fun to deal with.

If you guys could go back in time and give advice to your younger selves as they were embarking on their first respective tours, what would you say?

Dom: I honestly wouldn’t say anything, not knowing what’s around the corner is where all the fun is.

As you gear up to hit the road again, how are you gonna approach the shows? Are we thinking of easing the crowd into the bangers, or going hard af from the get-go to make up for the months in lockdown?

Dom: Straight out of the gates I think, everybody deserves it.

Lastly, and this might be the most important question of all, out of the two of you, who’s better at maintaining a luscious beard on the road?

Dom: Definitely Sonny. I got rid of mine a few months back, mustache life all the way.

Sonny: Me. But Dom does have a pretty sexy moustache.

‘Moving Blind’ is out now. You can buy/ stream it here. For our U.S. friends reading this, you can buy tickets to Dom & Sonny’s rescheduled East Coast shows here and Aussie fans can cop tickets to see Dom live in October here. 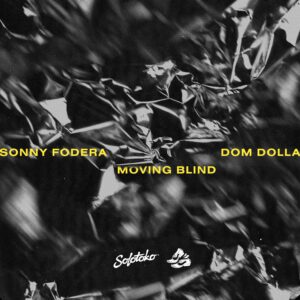 Share this
Interview: How To Survive A Tour With Dom Dolla & Sonny Fodera

4m Watch: An Awkward But Hilarious Interview With The Chats
Title says it all.