He really does it all.

From taking photos and film within the local music scene to writing, producing and releasing his own material, Yawdoesitall is a multifaceted creative at the heart of a young crop of emerging Western Sydney artists. He’s also been getting plenty of love on Triple J of late for his collaboration with Taka Perry and Yergurl on ‘21 Orbits’ and in keeping that momentum going, has now launched his first solo release for the year, ‘Get It’ featuring Finbarr (Sumatra).

‘Get It’ meshes everything that Yawdoesitall does best. Blending live instrumentals and classic hip-hop and funk elements, Yawdoesitall’s infectious energy and flair is felt bar by bar. With confident and lively wordplay throughout, his output on the track is matched by Finbarr who lays on slick and vibrant vocals for the hook. Run this one up, ‘Get It’ will have you out of your seat with major weekend energy.

To celebrate its release Yawdoesitall will be hosting ‘Yaw Does A Show’ on 27 February @Oxford Art Factory Gallery, where he’ll be showcasing works from across all of his passions. Head here for more info, give his new single a first listen below, and read on for our chat with multi-talented artist/ creator Yawdoesitall.

The first thing I’m keen to hear about is your new single ‘Get It’, which will be out on Friday when the interview runs. Tell us a bit about the song.

So ‘Get It’ was like, a bit of a fluke. My mate sent me an instrumental and at the time I was listening to a lot of Kendrick stuff – ‘i’, that was the biggest inspiration – but I was listening to that and just like in awe of that being dope. Anyway, he sent me this instrumental and it wasn’t even like that but I thought we could make something out of it. We just hopped in the studio, [and were] messing around and like there’s literally no formula to it. We just did it.

On ‘Get It’ I worked with a guy called Fin. He’s part of a group called Sumatra and also part of a band called Boomchild and they’re just like, crazy, crazy good. So it was dope that I got to work with him.

How did that collaboration happen?

So I produced a song with Fin. It was a song I did featuring Maina Doe. So we’ve already got a song together that was really dope but we just realised after that like, we really needed to work together again.

I pulled out a bar that I’d love for you to expand on: “Fuck life I’ma cry in a Tesla, die in a jet, make love to your sister.” What are you really saying here?

[Laughs] Basically, ‘Get It’ is in a state where you have everything, and you have that mindset, but you’re also in a position where everyone wants something from you. So like, fuck life, fuck whatever I’m going through. I’ve got money. I can cry in a tesla and die in a jet. It’s optimistic and kinda sad but I still got money though. So get it. That’s ‘Get It’.

Where’s the perfect place to listen to ‘Get It’?

I feel like everywhere. This is one of my favourite songs. I just play it wherever and it’s dope. In the club or wherever you’re at, just hear that song and it resonates. It would go hard at a festival though, that’s the perfect place.

On all your tracks you seem to have this really rich mix of instrumentation and production. What draws you towards that mix and are there any influences you can speak to as having inspired your sound?

It’s just experimenting. I’m a drummer. My background is just drumming so that’s definitely a big element in that. I just love natural instruments and coming up with beautiful organic music. I listen to a lot of DUCKWRTH, J.Cole, Kendrick, Stormzy, and a lot of other artists, but you can tell there’s a lot of little things where they actually go overboard and get specific people to play certain parts in it. That’s where I draw it from.

‘Free Zone’ and ‘The Man’ both have this like extended intro whereas on ‘Get It’ you pretty much jump straight in and bar up. Was there a different approach there or did that kind of just feel right for each of those songs?

I guess it was a different approach. I say this all the time but ‘Get It’ is basically ‘Free Zone’ on steroids. It’s because this time it was just like, “let’s go”. I was going and going, and trying different flows, and messing around with those. The first part I actually wrote before I got to the studio and I just felt like we could build from there. So the second half, even that “tell me what you want,” part we were just messing around and there were times we were thinking what the hell is that, but we did it and it worked.

And with the single you’re leaving the name Yaw. behind and reemerging as Yawdoesitall. I know that’s been your IG handle for a while but why did you decide to change your artist name?

So with Yawdoesitall, there’s more character to that. It’s what I’ve been doing for a long time. Before that I was doing everything separately. There was Yaw, Yaw Shoots who takes photos, and Yaw who does film sometimes but now it’s more about Yawdoesitall who does music and everything that’s around it. It just seemed perfect to go with Yawdoesitall. I’m doing a lot of production now too and so there’s more to talk about than just Yaw does this or that, you know?

For sure. Let’s talk about your other artistic interests. You first came into my awareness working on projects with Bodega Collective as a photographer but you just mentioned film as well. What else am I missing here? Can you give us a rundown of exactly what

[Laughs] Yeah. Photos, videos, rapper, singer, producer, drummer. I guess that’s pretty much it. It might seem like a lot but I don’t know. To me that’s it.

And how did one thing lead into another? Where does that journey start?

It’s crazy, so I started taking photos at church. My friend had a camera and he didn’t know what to do with it so I just thought f–k it and started taking photos. That’s when [taking] photos started but I was always into music – even like before ever going to shows – and it was cool but it wasn’t serious at all. I used to write poems a lot and that [music] was a channel to keep going with it. I was obviously taking photos a lot at the time so at first people were surprised when I told them about music but for me it was like, “yeah I’ve been doing music though.” But then I guess that had to be shown and my first exhibition, ‘Yaw Does It All’, I think is when people maybe started to realise.

How have peoples’ perceptions changed from that initial reaction?

I think it’s more accepted. I guess it’s just confidence that Yaw does it all. I always get that, like, “Oh, you really do it all”.

As a multifaceted artist working across those different mediums, how do you think that affects or translates into your storytelling?

They definitely complement each other in telling stories and painting pictures with my words. Also when it comes to visual direction and where I want to take my creative stuff, I can picture exactly where it’s going because of my background. I had to learn music just like I had to learn photos and so those processes are always connected.

Are there times where you’re going back and forth with different – maybe conflicting – ideas visually and sonically before you have a finished product?

Most of the time there’s no one way to take it and there’s competition between both of them. Like you need to master a particular craft but you don’t want to spend all your time on a particular one. So it’s definitely good and bad sometimes. That’s why I have people around me that I work with who can help me refine my creative ideas. Like I have a great input but they can also help by pushing me another way. I definitely need and am grateful for the people around me. 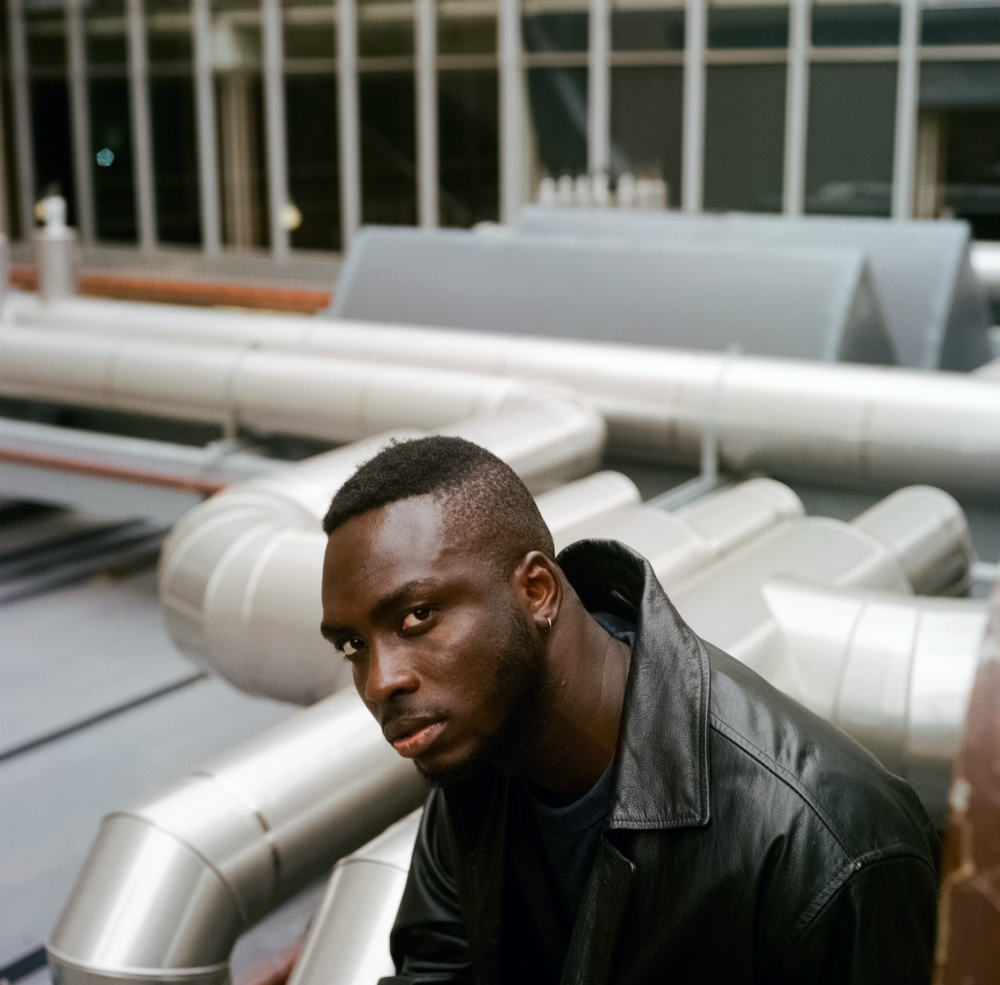 Do you have non-creative pastimes? What do you do to unwind?

I used to play soccer – I played state league so I was pretty serious about it. And I played basketball for a bit too. I kind of stopped like last year so I could focus on creative stuff.

Yeah so you could focus on doing it all.

I saw you at a 1nce again event last year which was a really cool showcase of emerging local artists. Who else do you think our readers should be keeping an eye on?

Shoutout Zion Garcia, that’s my guy. shoutout to Inferno. We’re all from AIME. Also my guy Solly is doing really well. Shoutout to everyone. Have you heard of INQ.? They’re dope too.

And you’ve got your own gig ‘Yaw Does A Show’ next week to show off your new single. What can we look forward to on the night?

New music. I’m always trying to experiment with stuff so this set is something I’ve never done before. I’ve also got a drummer and backing singers for some songs. It’s more like coming to watch an exhibition and seeing something for the first time.

And you’ve got Zyad and Man Like Mustii supporting. How did that lineup come together?

They’re my bros. That’s just one message away, you know what I’m saying? I’ve known these guys for a while. I saw Zyad perform in Wollongong with Boomchild and I straight away knew I wanted to get him for my show. We’re on the same wavelength and I really love his stuff. It was just perfect to put him on the show and Mustii and I have just been talking about doing a show for the longest time.

Anything else we should know? What’s the plan for 2020?

Yeah so we’ve got singles on the way but I’ve also got a project called Life I Chose, coming at the end of the year. We pretty much had an album but I’m cutting it down now to be an EP. Other than that? Just wins. More progress and growth. I want to test the waters and do more stuff. I’m a full time artist now so I feel like that’s what I should be doing. Oh and I really want to do a festival set this year. 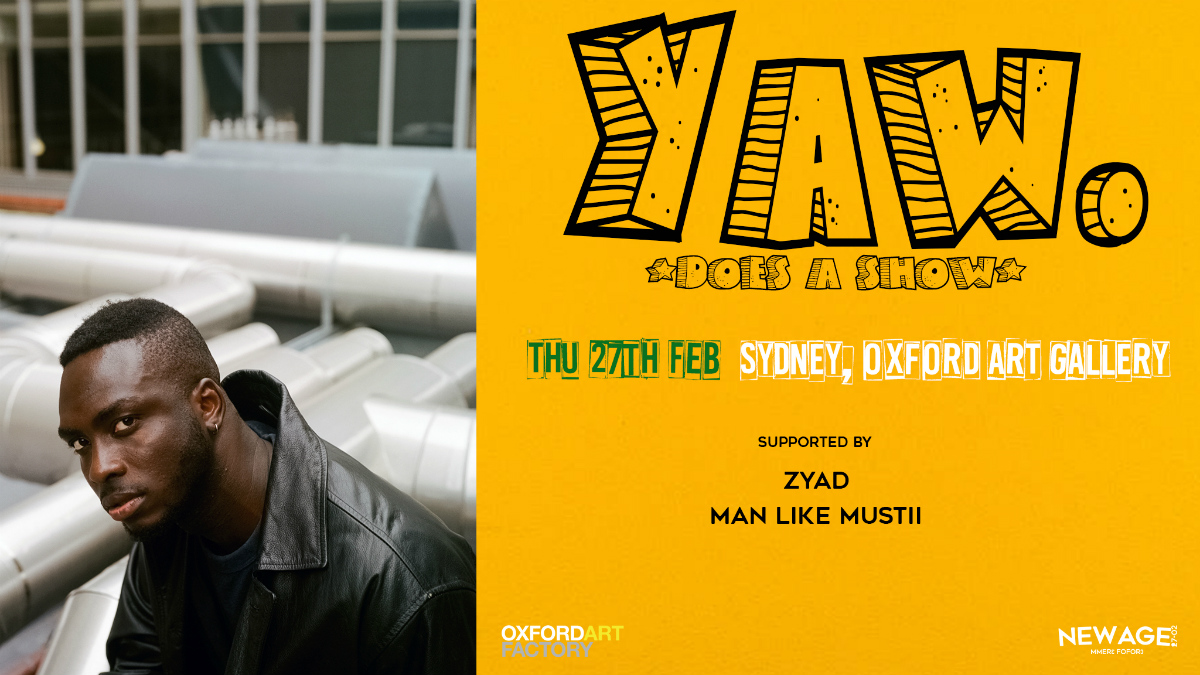 Share this
Interview: We Chat With Creative Powerhouse Yawdoesitall About His New Single ‘Get It’

2d Ever Wanted To Run A Label? Copper Feast Records Tell Us What Slinging Wax Pizzas Is Really Like
Vinyl lords listen up.