We hung out with Sydney’s most important food reviewer.

“It’s the everyman food. You don’t have to be rich to enjoy chips. Chips are for everyone,” says 31-year-old Michael Hasler, when we meet at Pablo’s Chicken in Surry Hills. In the months since February, the unsuspecting hot chip connoisseur, known online as Hot Chip Guy, has gone from chip enthusiast to chip blogger to chip… well… that’s kinda it, but he’s attracted thousands of fans and eaten what he estimates to be over 200K pieces of fried potato along the way.

After picking up our order from Pablo’s, we moved to an Indian restaurant next door (it was a little better suited for our chat), and opened up our servings of chips. To the untrained eye, they looked pretty delicious, though Michael quickly informs me that not all chips are created equally. “I reckon the perfect chips are crispy, fluffy on the inside, with heaps of chicken salt and those gnarly bits that you get on the end. Those bits. Where are they?” he says whilst rummaging through our pile, eventually finding a chip that was broken before being fried, producing a jagged and crunchy end. “That’s a good chip.” 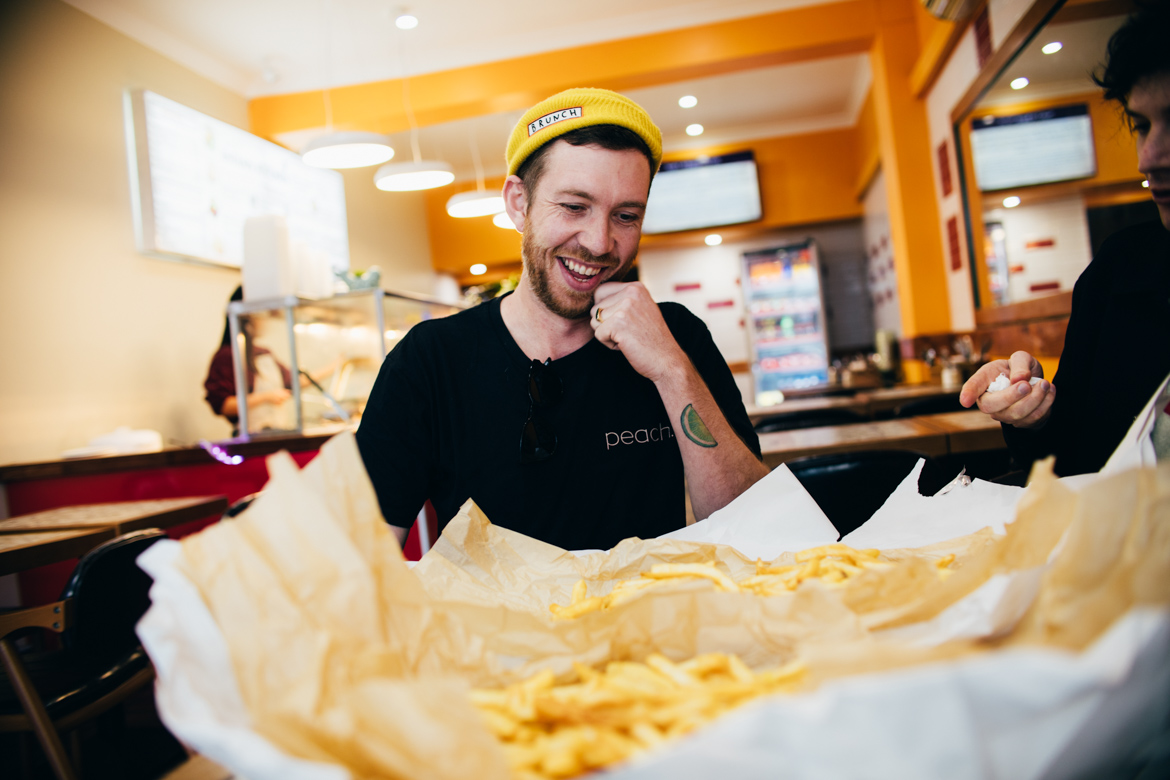 On his Instagram Michael rates chips from various Sydney restaurants on crispy/soggy ratio, value and saltiness, before giving them an overall rating out of ten. His scores have ranged between 3/10 (Oporto) and 10/10 (The Old Fitz), with one place serving chips that were so substandard that he felt guilty ousting them. ‘I feel bad because it was like nine o’clock. The kitchen was about to close and the guys quickly rushed out some chips,” he says. “They were fries and I’m not into fries anyway. They were just so shit.”

Michael, who is a furniture-maker by trade, takes the integrity of @hotchipguy seriously. Recently, a popular mayonnaise company offered him money to post an ad on his profile, he turned it down. “I was like, “Nah, I’m not changing my grid.” It’s just got to look all yellow,” he says. Other non-grid-altering offers have come in though, including a rideshare company that wanted to shoot a commercial where Michael would cruise around in one of their cars eating chips. This was an opportunity he couldn’t refuse.

“They said four grand for the day, which I was like, “Fuck yeah. I’m keen on that.” But I felt like it was going to be the most stressful day ever. I spoke to a few of my friends that are actors and they’re like, “Dude, charge way more than that because they’re going to be using that for a year… It’s more money than I’ve ever had,” he says. The shoot was cancelled thanks to COVID, but he doesn’t seem to mind. After all, it’s not why he got into the hot chip reviewing game.

“I mean, I really don’t want to take this whole thing too seriously. I still want it to be fun. And doing it all during these times, COVID and everything that’s going on at the moment, it’s something lighthearted that everyone can get around. Everyone can put their input in, have some fun with it,” he says. “I want to support one-off people. I noticed Pablos, they had 32 followers on Instagram. So I’m trying those guys the leg up. I’m not about Maccas.” 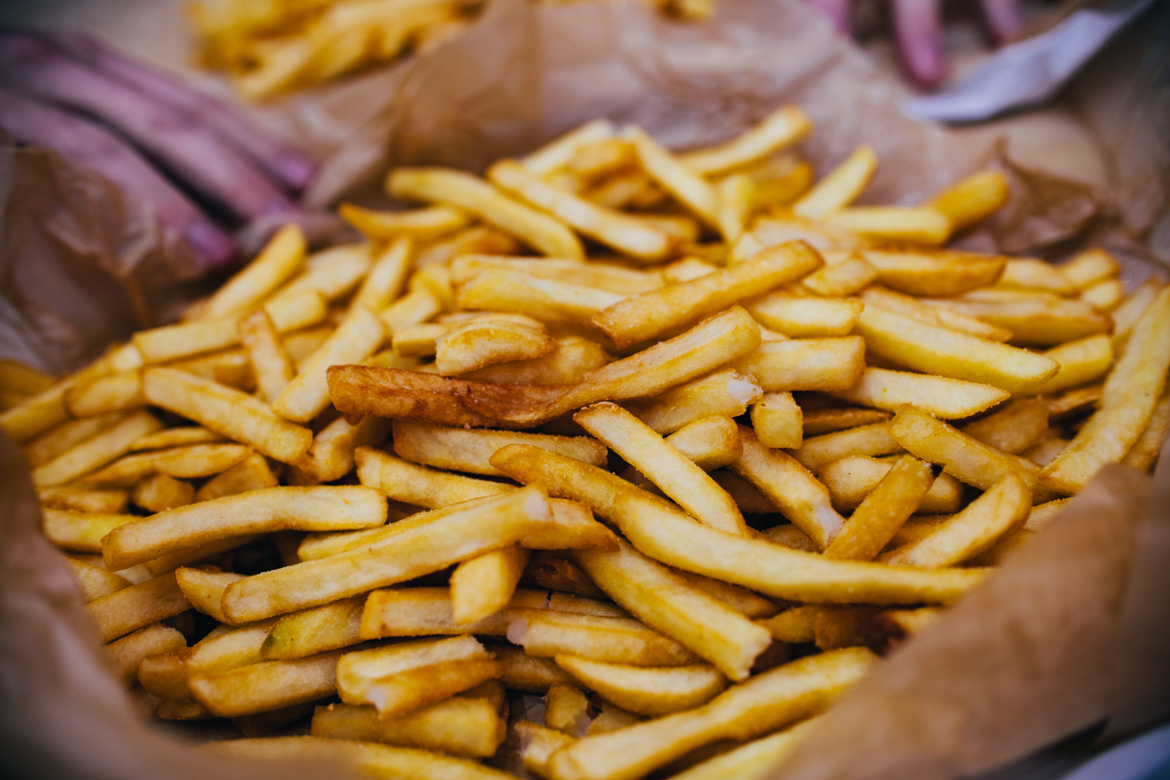 He harbours no grand plans for expansion of @hotchipguy, though his experience eating an array of different styles of chips has given him a potential business idea. “Have a chip store, but you don’t just have one set of chips,” he says. “You rotate them each week. So, it’s always exciting. So, people are coming in every week to get the new chips. Every week, you’ve got to keep going back.”

It’s a plan that’s pretty reliant on a customer base that is equally as passionate about hot chips as he is, and while it’d be nice if the world had a few more Michaels, perhaps he is blinded by his own enthusiasm for the old greasy potato. Head here to follow this legend on Instagram and watch on or even contribute to his odyssey as he journeys from shop to shop chasing that perfect chip. 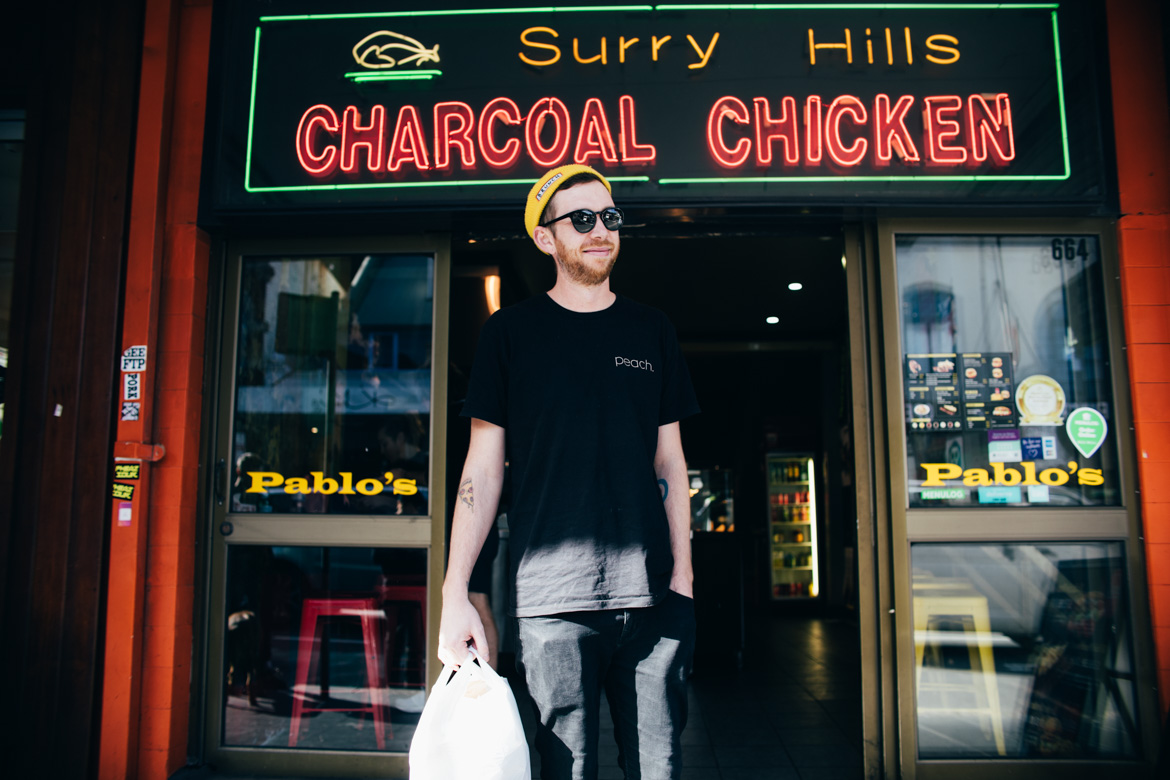